In a recent blog post (here), I described the system of Distinctions organised by the Royal Photographic Society (RPS) and my experience of attending an RPS Distinctions Advisory Day as a spectator. Following that, I also attended an RPS Photo Forum, which is a much more informal gathering in which to present images and get feedback on them. As a result of that, I gained a clearer idea of the types of image that would be suitable for putting forward as an LRPS Panel and in January 2018, I attended my second Distinctions Advisory Day, this time as a participant seeking formal advice on a proposed Panel.
The venue and format was exactly the same as previously described. There were 19 panels up for advice, a mixture of LRPS and ARPS hopefuls, and I was number 17 in the running order. The images I chose and the panel layout is shown below. 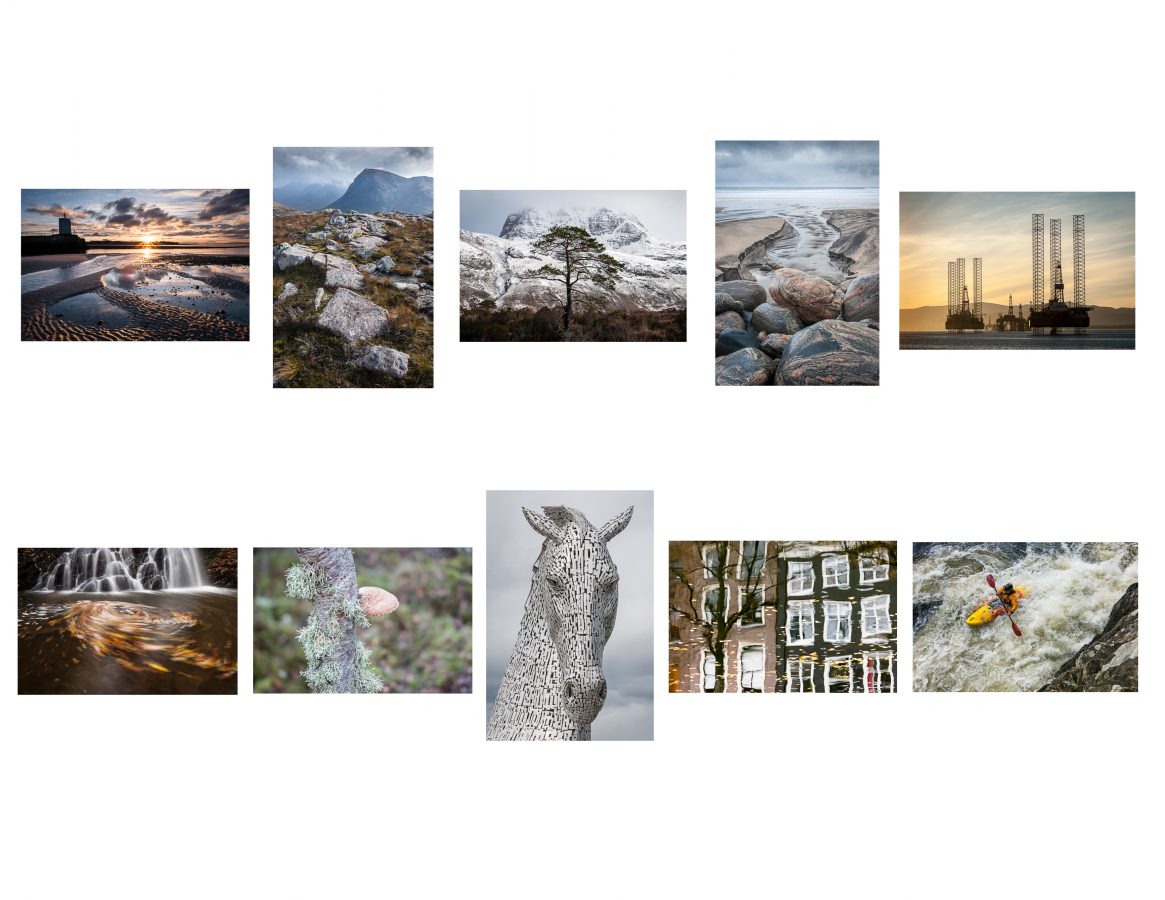 When your turn comes, you are called to the front of the audience of 50 or 60 people and asked to introduce yourself and say a few words about your panel. ARPS candidates read out their Statement of Intent, which is an integral part of an ARPS Panel. After a few minutes looking at and discussing the images, one of the group of 5 or 6 assessors summarised the feedback. In my case, this went as follows:
There was felt to be a good variety of types of image and approach. I was relieved to hear this as I am mainly a landscape photographer and I had tried hard not to repeat similar types of images and compositions.
Image number 7 (counting from the top left, the tree with bracket fungus) was felt to be shot in poor light (which was true) and not quite all in focus where it should be (obviously the background is allowed to fall out of focus, as I was attempting to demonstrate the use of differential focus using a wide aperture). As a result, it was recommended this image be removed from the panel and replaced with one of the spares. I must say, I was somewhat disappointed by this as though it is not the most exciting image in the panel, I had gone to some trouble to try to make sure it was at least technically acceptable, including making two visits to the location and focus stacking a series of 15 exposures with the focus at various points throughout the image to ensure it was all sharp. Hey ho.
Image number 5 of the oil rigs was praised for the nice light but felt might be better positioned more centrally. My train of thought was that the tops of the rigs formed a virtual leading line pointing towards the centre of the panel, which is why I placed it on the right hand edge.
It was suggested that image 8 of the Kelpie be replaced by another image of the Kelpies from the spares which has a slightly more creative composition. In fact, I preferred the spare Kelpie image myself but used the portrait format one because the vertical format seemed to balance the panel and the Kelpie was looking straight out of the page more, as befits a central image.
It was suggested that image 4, the seascape might appear to be leaning to one side slightly, but I rechecked the horizon carefully and it looks OK to me. Possibly just an impression from the lie of the land.

At the end of the day, I was given a written summary of the Advice which said:

“Not ready, but a suitable basis for a submission with more work.
Image 7 – weak, sharpness/ lighting. Out.
Review Panelling.”

So overall, I was reasonably pleased with the outcome. As a result of these comments. I have decided to replace the Kelpie image with the following:

The fungus obviously has to go, so I will be replacing it with this image from the five spares which the assessors also saw. It is more of a detail image, which I think adds a bit more variety to the Panel.

So the final panel will now look like this:

I have decided I will just go ahead and submit this for official assessment without going back to another Advisory Day and see what happens. I’m booked onto the Assessment Day for 28th April. Interestingly, after you have booked your Assessment Day, you are sent a three page Submission Details Form to send in with your submission. This asks various questions such as:

It seems they are keen to make sure you have done your homework and are not just winging it. Of course, if you have done all the right preparation and taken the process seriously they will know that and maybe it will go in your favour.

I’ll let you know the outcome.