Eigg, Laig and the Finger of God 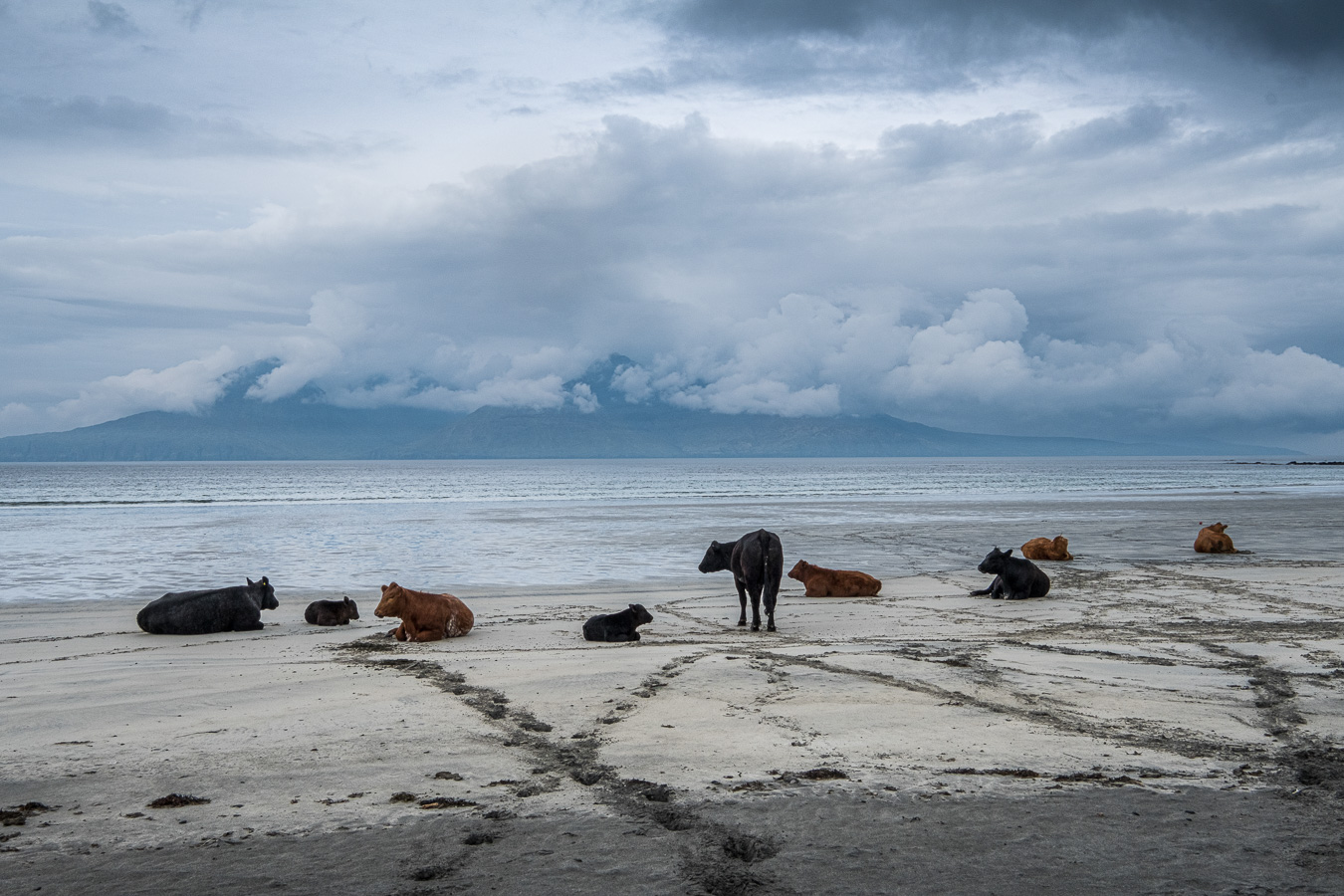 I first visited Eigg about thirty years ago on a day trip from Arisaig. We had a young family then but despite this I was keen for us all to climb the Sgurr in the 5 hour time slot we had before the boat was due to return to the mainland. Unfortunately (or not, depending on your point of view) the Captain of the Sheerwater sighted a minke whale on the way over and detoured to give the passengers a better view. This meant we were half an hour late arriving on the island, reducing our precious time ashore somewhat. Nonetheless we set out and eventually reached the top without incident, though taking somewhat longer than expected. Worringly, we could already see the return ferry approaching across the sea as we stood on the summit. We immediately set off back down but it soon became clear we were not all going to make it back to the jetty in time. I decided to run on ahead to let the boat know my wife and children were coming in the hope that they would wait. I reached the jetty just in time before the boat was due to leave but I don’t think the crew were very happy at being made to delay their departure. Eventually a landrover was despatched up the track to pick up the stragglers and we all made it on board, much to the displeasure of the Captain.

I have made a couple of other similar day trips in the intervening years but had never stayed overnight on the island and never had time for any serious landscape photography. We decided to remedy this and booked a three night stay in May 2019 at Lageorna, a very nice B and B in Cleadale, close to the beaches on the northwest side of the island. We decided on crossing from Arisaig again as the timetable of the Sheerwater allowed for a longer stay on the island. It is also possible to use the Calmac ferry from Mallaig. There were no minke whales this time, though we thought we spotted the fin of a porpoise or dolphin in the distance. Arriving on Eigg, we had time for a quick lunch in the Community Cafe on the pier before being picked up by Rory, son of our hostess Sue for the short drive over to Lageorna.

After settling in to our room, we set out on the short walk to Camas Sgiotaig or the Singing Sands, so-called because of the squeaking sound that is made when you walk on it. The weather was gray and overcast with light drizzle and occasional heavier showers of rain, but I was excited to be out with the camera and managed one or two shots I was pleased with. Fortunately, the cliffs here have substantial overhangs where we could shelter when the heavier rain came on. After a couple of hours exploring we walked back along the cliffs to Lageorna where we were treated to a delicious home cooked evening meal by Sue. 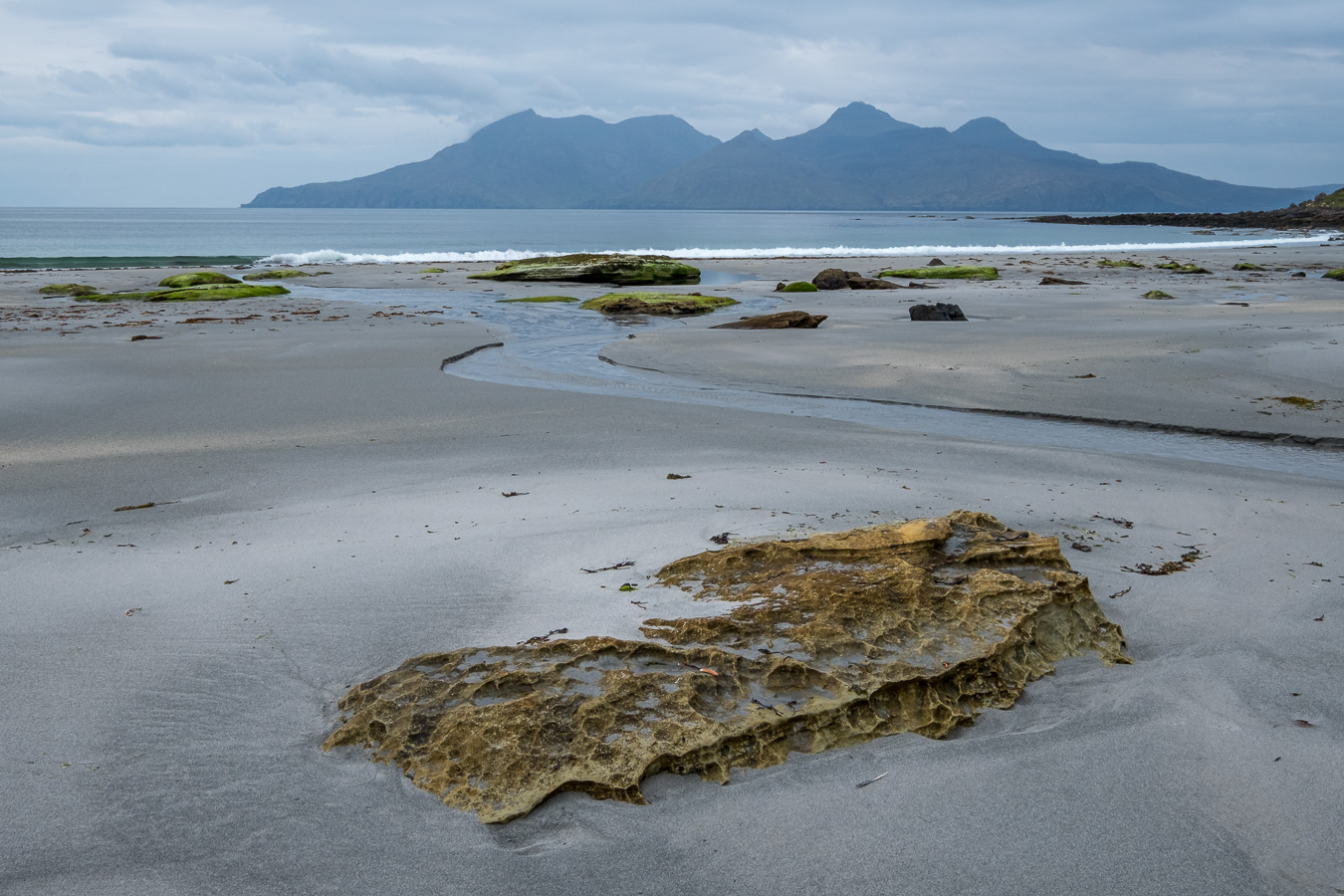 One of the reasons for choosing Lageorna was its close proximity to the beach at Laig, less than 10 minutes walk away down a good track. My plan was to wander down there after dinner each night to catch the sunset. Unfortunately, the first two evenings were cloudy so I didn’t bother, though on the third night there was enough clear sky to produce some decent light, more of which later.

The next morning the weather had improved slightly though cloud still clung to the top of the cliffs behind the house. Nonetheless it was dry and we were hopeful of further improvement as the day progressed. Our plan was to walk the length of the escarpment which runs for a mile or two above the townships of Cleadale and Howlin at the north end of the island, passing the so-called Finger of God (a rock pinnacle) on the way. We decided to delay our departure to see if the cloud would lift, which gave me a good excuse to wander down for my first visit to the beach at Laig for a photography session. This must be one of the most photographed locations in Scotland and standing there it is easy to see why. The view across the bay towards the nearby island of Rum is absolutely magnetic. In addition, the beach itself is decorated with a profusion of rocks, boulders, small streams and sandy patterns giving an extensive choice of foreground interest and compositional possibilities. Plenty to keep me happy for a couple of hours while we waited to see if the cloud would lift.

By around 12.30pm the weather had improved sufficiently to warrant setting out on our plan for the day. The route goes steeply up via a narrow path beginning beside Lageorna, actually passing right under Sue’s washing line! Eventually you reach a grassy shelf and turn right along it ascending through a gap in the cliffs on to the open moor above. Turn left here and follow the edge of the escarpment where you soon arrive at the rocky pinnacle known as the Finger of God. The cloud had lifted by this point and we were treated to magnificent views over the Bay of Laig and across to Rum.

We continued along the edge of the cliffs occasionally enveloped in mist which came and went as we progressed to the end at Dunan Thalasgair. From there a good path zig zags down back to the croft lands and the end of the road at Howlin. In terms of bang for the buck this must be one of the best half day hill walks in Scotland, giving magnificent panoramic views of the rest of Eigg and across the sea to Rum, Skye and the mainland and all for a very modest amount of effort.

The next day the weather had improved further, with no cloud on the tops and sunny spells developing. We had decided that we would not be climbing the Sgurr on this trip as I had done it at least two or three times before. Instead I was keen to explore the northern end of the ridge and so we set off for Beinn Tighe. The first part of the route took us along the full length of the sands at Laig Bay giving another opportunity to photograph that addictive view of Rum on the horizon.

An obvious track can be seen climbing diagonally across the hillside behind Laig Farm and we followed this, through several gates, eventually emerging above the sheep pastures onto the open moor. After a short stretch of rough going through the heather we spotted a faint path which seemed to be going in the right direction and certainly made progress a lot easier. Soon Loch Beinn an Tighe came into view and we climbed up to a shallow col on the ridge and then turned left for the summit. This is probably the only feasible route to the top as the hill is surrounded by cliffs and steep slopes on all other sides. We attempted a descent via the south west ridge but the slope became dangerously steep so we reascended and reversed the way we had come up from the col. Predictably, the views from the summit were extensive, along the ridge to the Sgurr, across to Muck and Skye but with Rum as usual stealing the show.

In descent we kept to the high ground over Sliabh Beinn Tighe to maintain the views as long as possible, eventually dropping down to pick up the path we had used on the ascent. By now the weather was really pretty good and I could see clear skies out to the west which offered the possibility of a decent sunset for the first time this trip.

After another amazing three course dinner cooked by Sue at Lageorna, I dragged myself away for the short stroll down to the sandy beach at the Bay of Laig. The sky was largely clear with just a few clouds and the sun was just about to drop behind the hills on Rum. The beach was deserted and I had the place to myself. In what seemed like no time at all ninety minutes had passed and it was 1015pm, time to pack up and head for home.

The following day we were due to leave the island, though our ferry was not until 5pm. Sue was able to give us a lift back to the jetty but not until 1130am which meant I had time for one last visit to the Bay of Laig. It was a lovely day with sunshine, blue skies and a few clouds. I wandered down to the beach but this time was keen to explore further along the coast to the north where I had seen on a previous walk there were all sorts of unusual geological formations. The tide was dropping revealing an interesting foreshore with slabs, rock pools, dykes and interestingly shaped boulders all around. I found a few compositions I liked but was under strict instructions not to be late back so would really have liked to have spent longer.

As I was returning along the cliff path I looked down to see a group of photographers with tripods set up on the sand, obviously a workshop group of some sort. “Wonder who that is?” I thought to myself, then when looking closer I recognised that one of the group was Colin Prior whose talks I had attended in the past. Sensing myself in the presence of a group of kindred spirits I gave a cheery wave and got one back from Colin in return, though he must have been slightly puzzled as he has no idea who I am! Later in the afternoon whilst waiting for the ferry, Colin came over for a chat and I was able to explain that I was the mystery stranger on the cliff earlier in the day.

Sue and husband Alasdair kindly dropped us off at the pier around 12 noon so as we had a few hours to spare we decided to rent a couple of kayaks and paddled round the coast to Kildonan to visit the ancient burial ground there. It was a lovely trip across beautiful blue green waters with the occasional seal on the rocks or popping up near the boats. We came ashore on the sandy beach at Kildonan, ate our picnic and then wandered over to the ancient site where Donnan, an Irish monk had first set up a monastery in the early 7th century. I decided I didn’t want to risk my camera ending up in the sea so left it behind in the canoe rental shop.

And so ended a fantastic few days on the magical island of Eigg. Safe to say I’ll definitely be back for more in the future.

A full list of ferry times and accommodation on the island can be found at isleofeigg.org

Details of walks on Eigg are given on the Walkhighlands website.

A Week in the Faroe Islands Scottish Nature Photography Awards 2019

A Week in the Faroe Islands